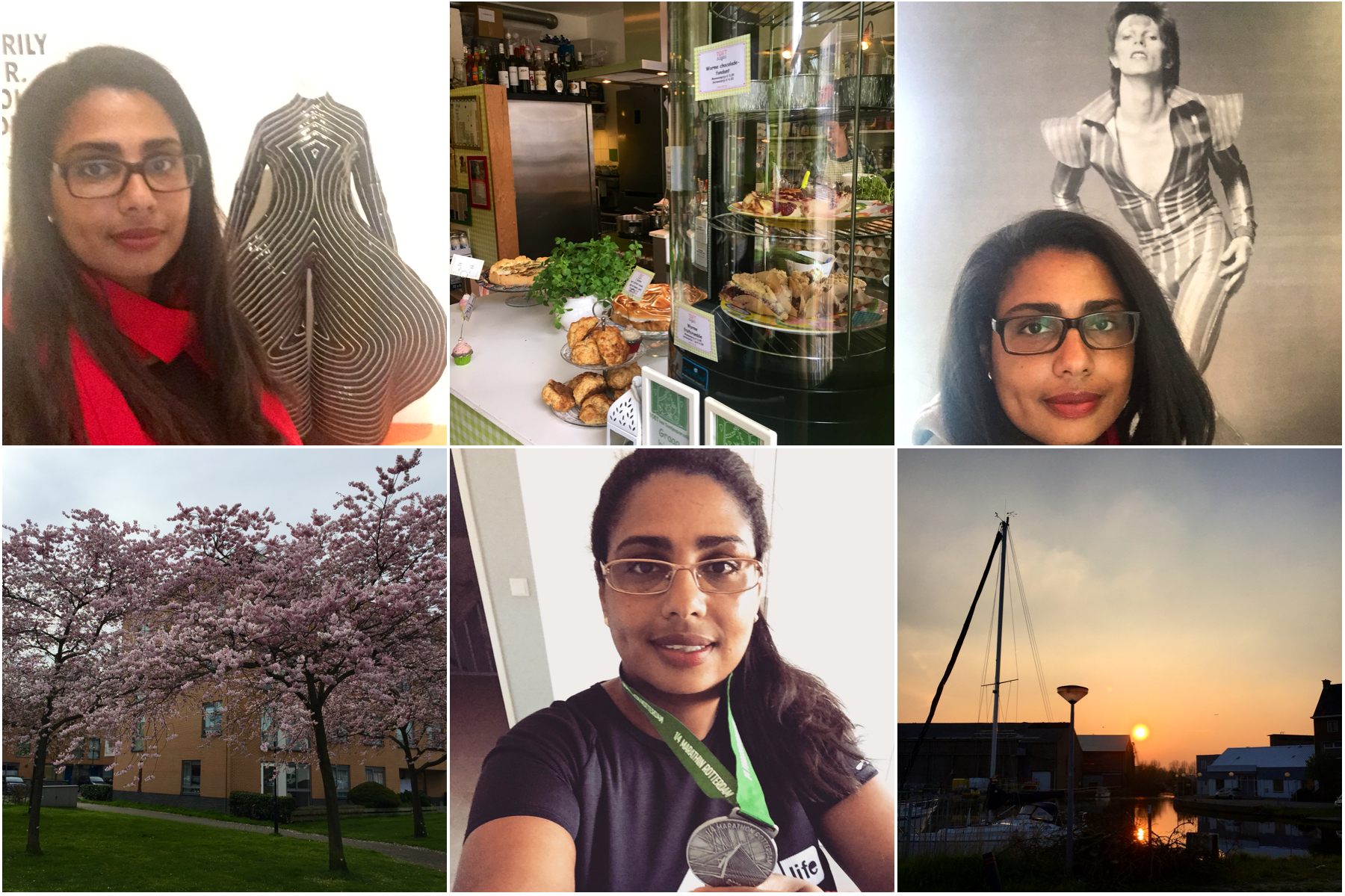 April always brings out the best of me, as it is hard not to be happy, enthusiastic and full of life when the world awakens and everything comes to bloom. Add to that a visit to the "David Bowie is" exposition in Groningen and my very first official run and you can imagine my excitement.


David Bowie - The Mask by jeanbeatles

Next big happening, for me, running 10K at the Rotterdam Marathon. Of course I should write "my first race", but as I cannot say (write) this with a straight face, I opt for "my first official run". With races I think of fast people, professional sporters and people with a healthy sports-oriented lifestyle. Not someone like me, a newbie to running, going for her first registered run. I proudly registered for this run in November, seeing it as my first test towards the New York marathon. I had been looking forward April 10, eager to run. But as the date came nearer, I started dreading its arrival. Though I had run (over) 10K before I did not feel ready. With the tonsillitis in February and last Month's surgery I had run less than I had anticipated. I felt that I needed more practice, wondered if there were any (good) reasons to skip this race. Of course there weren't any. Further it was important for me to have run at least one official race to experience first hand what to expect on raceday in New York in November. Though the details will be different, the gist will be the same. I simply had to go and run.

The morning of the run I woke up very early and dressed carefully. I was alert not to bring too much as I did not want to make use of the bag holding service. I planned to take an early train, but by Murphy's Law it was delayed. And of course it was so full that I could barely enter. After passing a few couches, we just pushed in for a place, crushed to the doors. The start was just across Rotterdam Blaak train station. Upon arrival I immediately felt the urge to go to the bathroom. There was enough time, so I went searching for an open restaurant and restroom. And with me half of the runners. Or at least it felt that way. I ended up in a 50 meter line with 30 minutes to start. Though I had some extra room as I was in the third starting wave. Nevertheless it was nerve-wrecking. At 10 past official start-time I was finally done and headed to the start. At least this way I could start immediately afterwards and get going. Except I could not. We still had 15 minutes of nervously jumping up and down, eagerly looking forward chatting to other runners. Maybe I would have felt differently if I had not been alone. But as I was it only gave me more time to worry about what I was doing, wondering how I would survive.

At 10:15 they finally signalled us to go, and at 10:19 I passed the start mark and my registered run started officially. It was a beautiful day, the sun was out and I felt good. I ran found a nice pace, slightly faster than normal, but one I could easily keep up. The rhythm of the group improved my performance. Until I had run about 3K and my careful dressing turned out to be too hot. I needed to take of my hoody. Not such an easy task, when you have to take off your race number, and replace that on your t-shirt. It slowed me down and killed my pace. After that I went on, but it felt more difficult. At the park I noticed a few ladies peeing behind trees, and I was happy that I had taken that extra time in line. The next part went slowly. I noticed a man I thought I had passed a while back. But I passed him again, and later again. The most embarrassing part, he was fast-walking. In my defence, he was very tall, with long legs. But still, walking. I felt such a snail. Along the way many people came out to cheer their loved ones, and in the passing cheered me on as well. Young children doing their best to quickly read the name tags of runners to yell "go Patricia, go Klaas, go Tilly". Heartwarming, and empowering. With the end nearing I got extra strength to finish quickly. At the finish we got our medal, a banana and a drink. I felt so proud!

As I went looking for the place to engrave my medal, I noticed the excitement building in the voice of the commentator. So I started listening. He was voicing the name of an African runner, coming near the world record for marathons. Marius Kipserem finished the full marathon, 42K, in 2:06:11 hours. And impressive result! Even more when I realised I had been, and still am, so very proud of my own time of 1:29:03 hours for only10K. And I laughed!

(*PS if anyone know where to find a tasty gluten-free scone, please share the address).