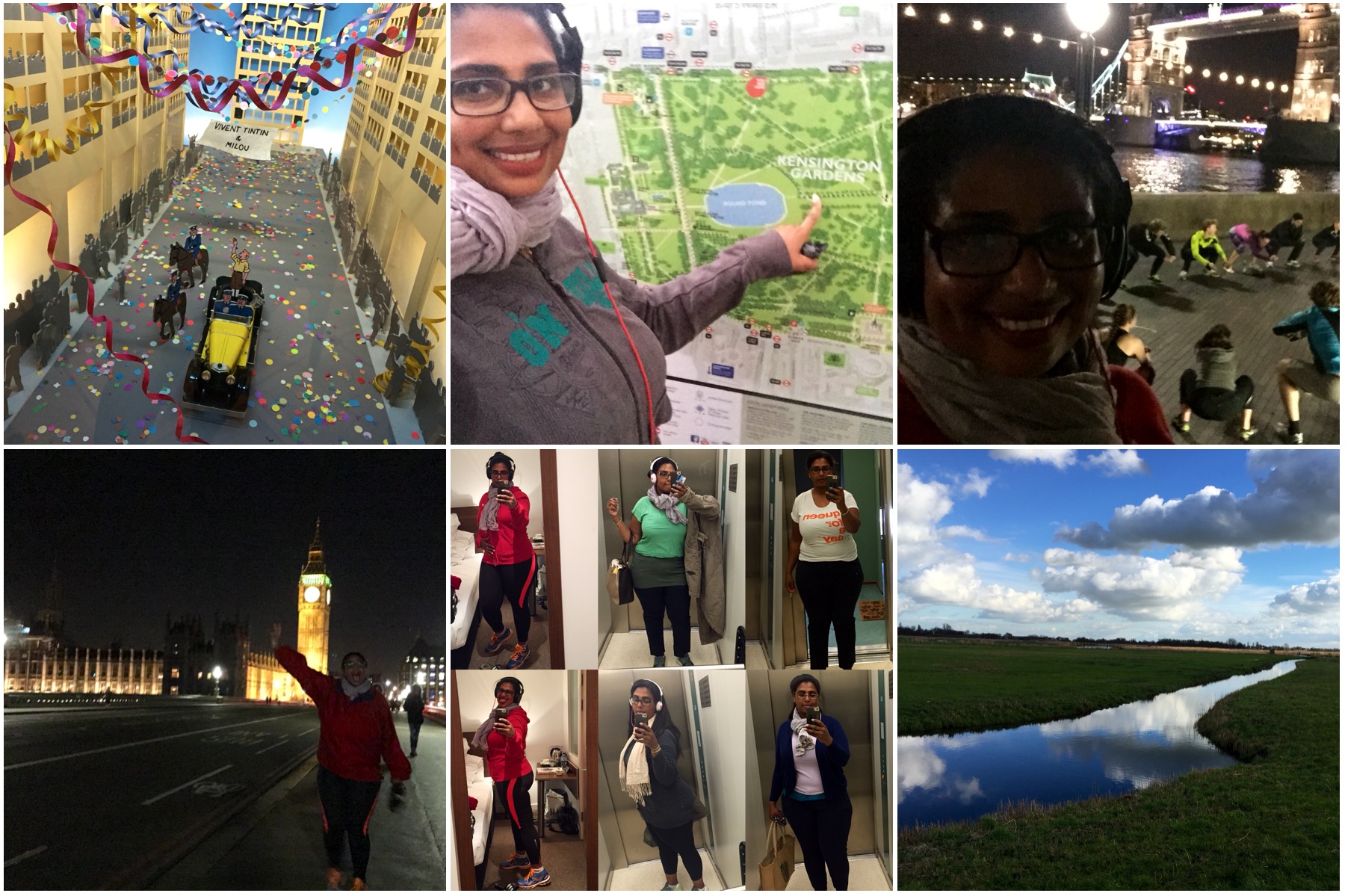 New adventures and a breakdown

Living the new normal, and finding out there's more to it than meets the eye.

Did I speak of a Rollercoaster ride in November? I spook to soon. This month was even crazier. Travelling, running adventures, illness, a breakdown, and a new start. I am starting to think that it's not a rollercoaster, but just everyday life. I've been standing on the sidelines for so long that I've forgotten what it feels like. To think I was even juggling a full-time position before. I am starting to understand the remark my uncle made three weeks into retirement: "My schedule is so full and busy, I have no idea how I managed to work!"

But let's start at the beginning. A few weeks ago I was offered a chance to visit London. Having a soft spot for London, I could not resist. And there were some things happening that I wanted to see and do. So I hopped on the Eurostar for an exciting trip. First stop in London was the Tintin exposition in the Somerset House. Ever since the first announcement I had put it on my "to-do" list, hoping to have a chance to visit London while it was there. I grew up with Tintin, and my uncle had been a big fan. He even wrote a Tintin musical. Since his recent parting I enjoy the things we both liked even more, as it seems to connect me with him even in absence. I found myself overcome with emotions upon entering Somerset house LNDN for the Tintin exposition. It's moments like this that I realise how much I miss him..❤️ How he would have liked it. The setting, the first drawings, the dollhouses. Of course it was more new to me than it would have been to him. He probably even met Hergé at some point. But to me it was  great, to learn more of something that gave him such pleasure. And I felt connected. And emotional.

Fortunately the emotion did not stop there. The next day, while visiting the Natural History Museum I received a confirmation email from the travelling agency for my participation at the TCS NYC Marathon. At once I felt tears running down my face. A weird emotion for someone who rarely gets emotional! But this was big, is big. Me, marathon, New York City, all in one sentence without a punchline. Beautiful. And exciting. So here I was, filled with information from exploring the museum, at that moment in the middle of some school classes. A big happy grin while the tears came running down my face. I think I even took a picture as the experience was to weird. No, no reason to look up, that did not make the cut. That one's meant to be private.

Later that day I headed out for my next adventure, running in Hyde Park. Since my first 5K, when I realised I was starting to like running, I started thinking of places I wanted to explore running. Hyde Park was one of the first that came to mind, next to running beaches, the Seine and the Thames. Mind you, this is only the start, I hope to ad some more exotic places to the list. I wanted to start Western Europe and expand from there. I set out an interesting route through Hyde Park and Kensington gardens that matched the distance of my running plan. I started running, and after 10 minutes found I needed the loo, again. One should think "running is just running", but I seemed nervous about it. About the run, and about heaving to go in the middle of the park. So I went by a fancy hotel across from the Park. After that it went marvellous. I ran, and looked, and ran and looked, and felt exhilarated. So alive, so happy, so in the moment. I went faster than I normally went. Even when taking into account the moments I had to stop and watch the map. I felt good, healthy, as if the new lifestyle became just that; a new lifestyle. Where even on holiday I would take sporty me out for a run. I felt part of a movement of runners, and waved happily to all the runners I countered. And took a picture in front of the map. I needed proof that it actually happened. I ran almost a kilometre longer than planned and felt good. It felt less good when I got back and had to put away the stinky clothes. How do other runners do that?

The next day was more wandering around, exploring the city and do a little shopping. I had some Selfridge gift cards and wanted a new Perfume. It had to be "La vie est belle" by Lancôme! I loved it smell, liked the name, and wanted the cute gift bag they offered with it. La vie est belle, I could not have said it better. I was having a blast! And it was not over yet, I had one nice (running) adventure ahead. Running with the London midnight runners. Since I started running I started following several running accounts on social media. The London Midnight runners was one that stood out; it was open to all levels, free for the Thursday and Sunday runs, and made it fun with music and added activity. They also offer (paid) indoor classes to further work on your core and condition. I also loved the fact that the Thursday run was a 10K run along the Thames, with a stop every 2K for core exercises (and for the slower people such as I to catch up with the group. That night I headed out to the meeting point: Forum Magnum Square. As I was early I could see everyone arrive. There were people from all ages, various background, various fit levels of (thank God), and many newbe's. I met a few girls who like me had just started and was happy that maybe I would not be alone in following the group. When it was time we all moved towards the area in front of the London eye for the warming up. The music was turned on (a few runners of the organisation ran with a wireless speaker) and we started with the warming up.  A happy affair, as we girls got giggle from jumping up and down. After a few minutes the runners grabbed the speakers and started running. After a few minutes I found myself at the end of the group, watching everyone speed past me. Before I could get scared to lose the group, I remembered the stop every 2K. So I relaxed, found my own pace and ran. And watched. There was so much to see. And it looked so different when running past. It was as if I saw it for the first time. And not before long I saw the group, huffing and puffing on core exercises. I had a few minutes to catch my breath before we moved on. Through small streets, tunnels, by the water, by City Hall and onto the next stop. Then over the Tower Bridge, by the Tower of London, and the next stop. I appreciated the stops, and the chance to stay connected. I enjoyed the sight seeing, exploring the little back roads I normally would not see. And running by the water always appeals to me. The last stop is at London Eye, where we cool down together, followed by drinks after. At the cafe they have set out plenty of carafes of water for us runners to rehydrate. After a few drinks we take a picture in front of Big Ben and head back to the hotel; tired but content.

The next day it's time to go home, and to prepare my next adventure. After a night home, I head to Leuven, to help my youngest brother move from Leuven to Antwerp. We have some quality time together while packing his stuff. The next day at 5AM we finally arrive home. And I am exhausted. After a few days the exhaustion is still there and for the first time, in a long while, I experience a few bed days. When I started to feel better, I visit a friend and have a great energising afternoon. A few days later I discover that I have tonsillitis and a urinary infection. I cannot swallow, cannot drink, let along eat. I am not liking this one bit!

And I begin to realise that maybe, the move after the trip was too much. And working till late at night, and to arrive home at 5AM, only to continue at 9 AM was maybe a bit too much. With the healthier lifestyle, better sleep and feeling stronger than I ever, I felt ready to conquer to world. Except, I was not as strong as I thought. Only slightly stronger than before. So with these activities I had lowered my immune system, and got a bacterial infection (tonsillitis ànd an urinary infection). Breakdown. And this time it took some time to recover. I had no energy and running was far from my mind. At the end of the month things went slightly better and I went on my first outdoor activity, a baby shower. And shortly after the first run with the running team for #dance4life. And a short visit to the Comics museum in Brussels, another moment of feeling connected with my uncle.

I feel healthier and better than before. Stronger. But to make it work, this time, I will have to make some changes. I already feel overwhelmed with life as it is. But I will have to make it workable. And more. Especially as this is only the start. In due time I want to work full-time at a demanding position again. This time I'll have to approach it differently, as this time I want to survive it without coming back to this status of over-exhaustion. No more breakdowns. Life's to short and valuable to experience this more than once! This was a warning, and one I will take to heart.