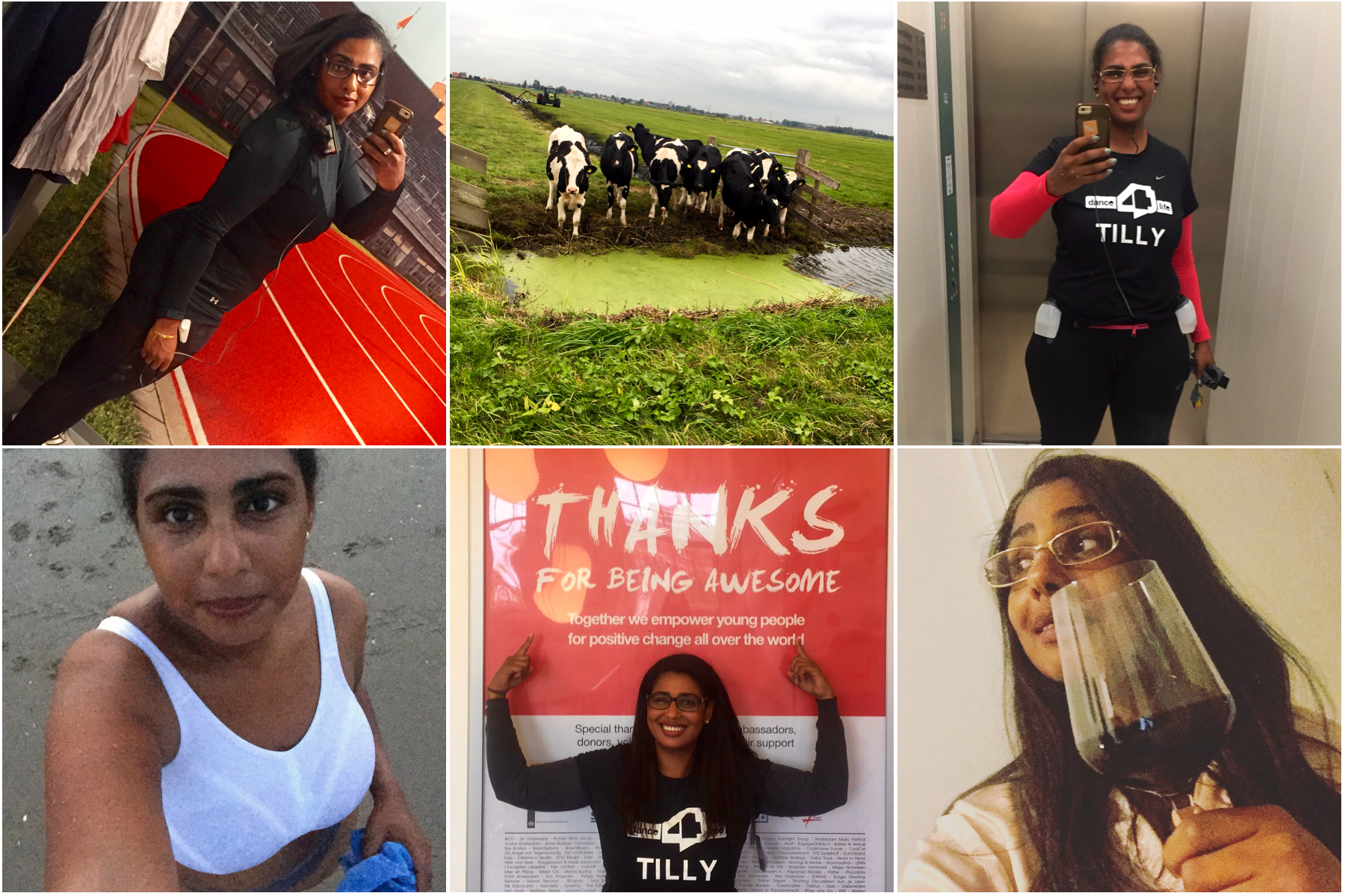 As the marathon date is getting near, I experience a bulk of emotions. Though that may be expected, it freaks me out, sort of. Experiencing emotions is new to me. Normally I succeed in following ratio, thereby trumping emotions. But it’s different now. It’s been a while since I took up such a big challenge and there is so much going on. And so much to do: raising money, training, connecting, informing.

The training picks up and I run further and further, getting to know the city and its surroundings a little bit better. The longest run was over 3 hours. And my furthest distance is 24K. Avid runners will notice that I am not the fastest runner. I only started running a year ago. I ran to Amsterdam to support my fellow dance4life runners who were participating in the Amsterdam half marathon. I saw cows, discovered new routes and trails and saw some special sights. I ran in silence areas where I felt as if I was the only person alive in the world. And was challenged when a beautiful became a bit troublesome because of the tourist and special performances blocked the road and slowed me down. The best run was the one that ended at see, and I entered the water in my underwear. I never suspected that my body could achieve this, that I could do this. And even though I notice the growth, I try not to think to much of the actual race. Neglect the emails that count down the days 100, 90, 60, 30, 10…. Look at the marathon route but not to specific. As the nearer it gets, the more I train, the better I realise the magnitude of 42.2K.

And 5000 Euros. Though I have raised quite a sum, it troubles me to think how I can realise the rest. What can I do? I have spammed everyone I knew and pray to discover some sort of creative hidden talent so I can make and sell stuff. It worries me, as I do not have the full amount yet and it is almost time. Instead of presents I asked for donations for my birthday. Even-though I appear to be loud, am rather active on social media; I prefer to be the quiet person in the back. And now I have to speak up, be loud, call for attention. It is a role I manage well, but one I normally try to avoid. The support is overwhelming. And surprisingly emotional. For someone who is not in sync with their emotions it is rather scary. I do not think I have been as emotional since my pregnancy many years ago. I regularly found myself torn up over supportive and sponsor emails. Even over 5 Euro donations. But the idea, that people took their time to go through procedures, sometimes even people I have not seen in ages. Or people I have never met in real life. I was not prepared to experience this. And though seeing and reading this makes me happy, I am still struggling with the idea of emotions. And somehow hope I can put them to sleep after the run. From books and articles I read I come to expect exceptional weeping during my run… I can only hope it will not take too long.

As time proceeds I reluctantly start thinking of the big day. It excites and scares me. From dance4life I get my beautiful shirt with my name on it. I’ll have to finalise the outfit for raceday and I start testing combinations on my run. Though it seems trivial, it actually is important. It’s hard to run when the frustration of slipping tights, to hot or too cold outfits, or other insignificant issues slow you down. As the run will take long, especially with my pace, I also look at nutritional options. The marathon will cost a lot of energy and it is important to replete during the run. Stopping for lunch is not an option. So I start testing nutritional gels and hydrating sports drinks during my endurance runs to experience the effect. Three weeks before the big date we have special session with a seasoned marathon runner who gives us all the ins and outs about marathons and specifically the New York marathon. On the weather, the route, the bridges, how to proceed, how to make use of the official fuelling stops and plenty more. And of course the outfit. We were advised to wear a thermoshirt to keep us warm in the morning and of which we can roll up the sleeves if it gets warm and sunny. Further we were advised to wear either winter sport outfits or other warm clothes that we can leave at the start. As we have to crosse the bridge to the start early, and will have to wait for a few hours, we will need the clothes to stay warm. Of course there is an option to leave your own clothes and pick them up after the run. But that seems like a lot of hassle. And things can get lost. Much easier to get the poncho at the end and head to the hotel. I will be in need for that shower after anyway. After his speech I feel more at ease.

A week before departure dance4life invites us to a extraordinary event “dance4life unplugged”. It’s an event that takes part during a special week where dance4life field workers from all over the world come to the Netherlands to connect with- and learn from each other. We got to meet the people who are out there, working with the young people worldwide, inspiring and supporting. The front line of dance4life, the people that actually inform the youth and reduce AIDS/HIV infections. A young girl shared her story, of a world far away, where lack of knowledge led to fairytale like situations of people disappearing or being bewitched. Of darkness, that disappeared when knowledge arrived. Where education created understanding and acceptance, and offered opportunities. And instead of feeling Victimised she became an inspiration to a new generation, by being the change. Music helped her through difficult times, & gave pleasure. Touched by her story, the musicians end the evening with her favourite song Coldplay’s “Fix you”. And we all join in singing and humming. And us runners realise even more the importance of our run, of us raising money. That’s why I run, to help raise money so dance4life can reach even more young people worldwide. So they can listen to their stories, empower and educate them. And to help change the stories of new generations..